Candidate Statements for the CUG 2020 Elections

Within each position, candidates are listed in alphabetical order.

I have served on the CUG board of directors for the last four years in a director-at-large position. In this role I have served as a sponsor liaison for the conference where I managed sponsorship solicitations and coordinated sponsor activities. If elected as President, I will serve the CUG membership and support the continued growth of the conference to the best of my ability.

I am excited to run for the Office of Vice President of the Cray User Group. As a user of Cray systems for over a decade, staff member at NERSC at Berkeley Lab, author of several contributions to CUG programs and organizer of multiple events I have the experience to represent the CUG community on the CUG board. Additionally I have direct experience in this role. Over the past year I have served as the interim Vice President for CUG – organizing the CUG 2020 event which unfortunately had to be cancelled and laying the foundation for CUG 2021. The CUG conference, proceedings and journal publications are an important resource to the community. As vice president I will work with the community to ensure that the high standards of quality we all expect from CUG are maintained and that the topics and focus of the program remain relevant. I look forward to the opportunity to serve the community by working to support, refine and improve the CUG program – ensuring the continued success of CUG.

If elected I will diligently fulfill the duties of vice president. I have confirmed that I have the support of my management in carrying out the requirements of duties. 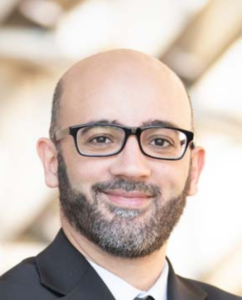 I’m Bilel Hadri, computational scientist at the KAUST Supercomputing Lab since July 2013. I’m leading efforts in benchmarking, regression testing, performance optimization and helping in coordinating strategic efforts for systems procurements, upgrades and providing advanced support to users.
I received a Master in Applied Mathematics and a PhD in Computer Science from the University of Houston in 2008. Following a Postdoctoral Position in 2008 at the University of Tennessee with Dr Jack Dongarra, I joined the National Institute for Computational Science at Oak Ridge National Lab as a computational scientist in December 2009.

I have been active at CUG since 2010, attending and presenting papers (won the Best Paper Award CUG2012) and several BoFs reviewing CUG submissions in applications and user support attending XTREME meeting since 2015 elected CUG PEAD-SIG chair in 2016 and reelected in 2018

I’m running this year for the Director-at-large position to help the CUG board in different activities such as outreaching to the Cray HPC community, from leadership customers to small sites, helping in social media like Twitter where I’m an active member and one of the community managers at KAUST on HPC activities coordinating with the marketing and communication team. For the last 10 years, I have volunteered at several HPC conferences program committee including SC, ISC. By joining the CUG board, I look forward to the opportunity to learn from the current board members, and to contribute to improving the quality and quantity of submissions by incorporating best practices from other HPC conferences.

If elected, I will diligently fulfill the duties for which nominated during the term.

My name is “Evil Jim” Williams and for the last three years I’ve been privileged to serve as a Director at Large, first in a 1 year special appointment and the last 2 years after a successful run during CUG18 in Stockholm, Sweden. I first began using Cray systems in 1994 as a graduate student and became a Systems Administrator in 2006 when I became involved in CUG. Since that time I’ve administered almost every line of Cray system since the X1 and have been an active participant in both the XTreme and System Support SIGs. I’ve enjoyed my time working on the Board and would greatly appreciate your continued support for a second term. Thank you very much.

I certify that if elected, I will continue to “diligently fulfill the duties of the office or the position on the Board of Directors for which nominated during the term thereof”